Home Search Related Links About Us Contact Us FAQ Highlights

What Are the Medical Effects of Exposure to Smoke Particles?

"To summarize bluntly, any increase in fine particles in the atmosphere kills someone. The victims remain nameless, but they have been deprived of life all the same." (Montague, 1994)

Particulate pollution is the most important contaminant in our air. ...we know that when particle levels go up, people die.

"Biomass (wood) smoke is composed of a relatively equal mixture of coarse and ultrafine particles and can penetrate deeply into the lung, producing a variety of morphologic and biochemical changes," said Dr. Ramírez-Venegas. ( Public Health News : Article Date: 20 Feb 2006 - 2:00am (UK) )

"Air pollutants can also cause immune suppression or overstimulate the immune response, which can lead to allergies and immune-mediated diseases. Air pollutants have also been linked to psychological disorders and toxic damage to the nervous system and the brain, especially in developing fetuses or young children. In addition, the report points out that air pollutants are thought to have detrimental effects on the reproductive and endocrine systems, but according to the conference summary, these effects require more research to be fully understood. The report points out that certain populations, including children, the elderly, and minorities, are at a higher risk of being affected by air pollutants (American Medical Association, 1995)."

Air Pollution Found To Pose Greater Danger To Health Than Earlier Thought Date: 9/21/05, LOS ANGELES (Sept. 20)-Experts may be significantly underestimating air pollution's role in causing early death, according to a team of American and Canadian researchers, who studied two decades' worth of data on residents of the Los Angeles metro area.

Woodsmoke Health Effects: A Review, (PDF 1.9MB) Inhalation Toxicolgy: 19:67-106, 2007 This study by many of the luminaries in the wood smoke scientific field was sponsored by the Canadian Government.

The Connection Between Cleaner Air and Longer Lives as reported by the New York Times, Sept. 24, 2015. "As the United States and other nations continue to debate the costs of environmental regulation, they can do so with the knowledge that the benefits can be substantial. As proof, we need look no further than the five extra years residents of Weirton-Steubenville are living and the hundreds of millions of years gained by Americans throughout the nation."

Meet Your Body : An introduction to how wood smoke hurts your health. 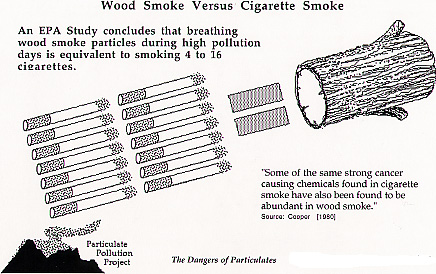 Mechanisms of Disease and the Healthy Cardiovascular System.

Antioxidents and Particulate Polution:  People who have asthma and COPD are more vulnerable to particulate air pollution if they have low levels of vitamin C in their blood, a study from London found. The results suggest a diet rich in fruits and vegetables may suppress some of the harmful effects of air pollution.  (This does not solve the problem; perhaps it helps. - Burning Issues Editor)